After driving a short distance from the main road, we entered the gates of Kambi ya Juu Integrated School in Isiolo South Constituency, Isiolo County. We were greeted with a warm welcome from the school’s administration followed by a spurt of hand sanitizer to our palms.

The grins on the faces of the school’s administration and the chuckles from the children at the school mask the institution’s long standing needs.

Upon arrival, Rejoice Africa Initiative (RAI) and Global New Generation Kenya teams handed over foodstuffs, soaps and masks to the school’s administration – items that were central to the immediate needs of the school.

We were briefed before the visit that there is a shortage of food supply to the 359 children at Kambi ya Juu, 32 of whom are visually impaired and fully under the care of the school. But this is only half the story as far as the needs of the school are concerned.

Kambi ya Juu Primary School was started in 1982 by the Anglican Church of Kenya (ACK), and later became an integrated school in 1985 in order to serve both non-disabled and visually impaired learners. The integration was initiated by a visually impaired philanthropist – Reuben Oyani – who mobilized funds to construct a shelter in the school for visually impaired children.

The school mainly hosts children who are visually impaired, but also serves children with various forms physical disabilities. It also acts as a child rescue center providing refuge for girls at risk of early marriages, orphaned and neglected children and children living with HIV/AIDS.

According to Jennifer – the head teacher at the school – even though the school is under the national government, and therefore a recipient of monetary support from the Ministry of Education, the support only covers the costs of school stationery, such as chalks and books despite the need for food as well.

“The Ministry of Education also supports the school with food, however, it is not enough and doesn’t come every term like it is supposed to.” Says Jennifer.

Because of the food shortage, Jennifer has had to supplement government food supply to the school with occasional food support from well-wishers, who include the office of the District Education Officer (DEO), NGO’s as well as international and local philanthropists.

Sometimes when there is no help forthcoming, Jennifer and her members of staff are compelled to contribute money amongst themselves to buy food items for the children.

The school has a stalled kitchen building that requires support to complete. It is part of a planned lasting solution to prepare food and sustainably feed children at the school.

“Most of these children only have one meal a day, and that is why we are hoping to complete the kitchen, have sufficient water to grow our own food and be able to cook meals in the school that are enough for everyone”. Jennifer says.

“Apart from food shortage and strained access to clean and safe water, amenities such as toilets are located fairly far from the classrooms and dormitories making them inaccessible to visually impaired and physically disabled children, especially at night. The school requires special needs classrooms for children with visual and physical challenges”. Amina says.

Amina adds that, because visually impaired children reside at the school, they need clean and safe water for daily use. This is important because the school – which does not have a perimeter wall – is located around hostile communities, exposing children walking to fetch water a distance away from the classrooms or dormitories to human attacks.

According to Jennifer, the borehole within the school compound has been a source of conflict between the school and the local community, making it difficult to guarantee safety for children who have to struggle with members of the community to use the borehole. She adds that there needs to be a dedicated borehole for the children located near school classrooms or dormitories.

Despite the challenges, the significance of Kambi ya Juu Integrated School to Isiolo County cannot be stressed enough. It is one of the 3 schools in Isiolo County that address human disabilities, and the only one that caters for visually impaired children in the county.

The school has made great impact in the lives of children who would otherwise be abandoned and hopeless. One such beneficiary is Mahat, a 17 year old boy who went through primary education at Kambi ya Juu, where he learnt how to read and write, and is now pursuing secondary education at Thika High School For The Blind.

According to Mahat’s parents, Mahat lost his vision at infancy. Because of this, he stayed home while his siblings went to school. It was through community outreach that Kambi ya Juu identified Mahat at the age of 6 years and enrolled him for special education.

Agnes Lekunye from Samburu is another example of the progressive impact the school has continued to make through saving girls from early marriage. Agnes had low vision – a condition that significantly affected her ability to read printed information.  It was at Kambi ya Juu that Agnes learnt to read and write, did her Kenya Certificate of Primary Education exams and secured sponsorship to train on hair dressing, tailoring and pastry chef. She currently runs her own salon in Meru town.

The school takes learners through the standard Kenyan curriculum, but visually impaired learners’ work is braille embossed, alongside using other special learning materials and equipment. Embossing is done by specialized printers whose outputs are braille characters on a paper for tactile reading by a visually impaired learner. The school, however, is in need of more of these machines and their accessories. 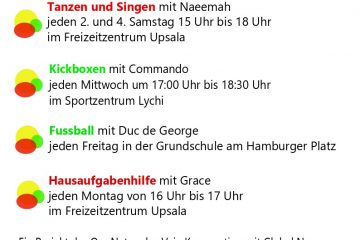 Global learning in Berlin is fun! 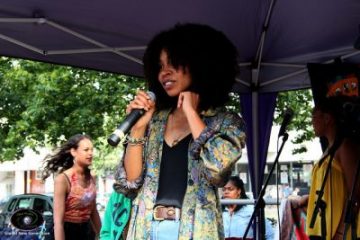 On August 11, 2019, we opened the AfricaYouthDays on Leopoldplatz with a public festival, which takes place in the style of the Africa Youth Day. Invited were all initiatives, associations, groups and of course the Read more… 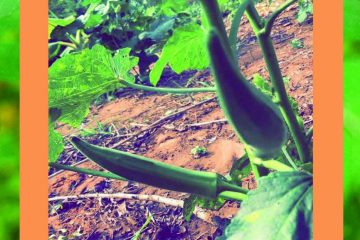 Permaculture Course by Global New Generation Berlin and Ghana Permaculture Institute Is your passion to bring lasting changes? Do you want to solve environmental and social problems in your community and around the world? Do Read more…