Report of the trip to Paris 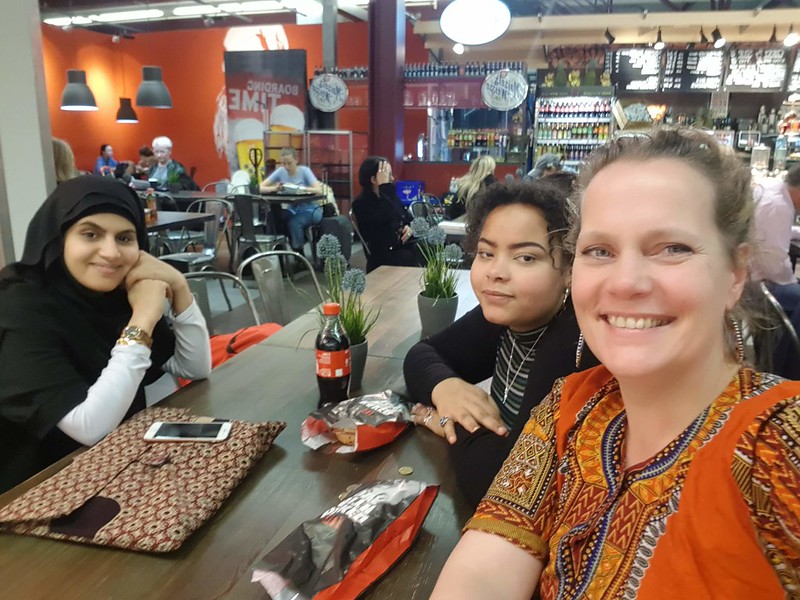 Our flight left at 8:30pm. We met at the airport at 5pm, so we wouldn‘t miss the flight due to the long check-in. Since we were a woman with dreads, one with a headscarf (hijab) and an Afro European, it had been the case that we missed the flight because of the intense check-in prodedures. We got through all the checks relatively quickly and were good in time. We asked again exactly where our flight was going because there were two flights to Paris. When the check-in at easyjet started and we got in, the lady told us that it was the wrong flight to Paris and that the gates had been changed, so we ran to the other gate with me and my sprained foot. We got there at 8:18 pm and there were two other people standing there and the lady told us that we were not allowed to get on the plane anymore, even though it was right in front of us. It was so depressing! Everybody was arguing with the lady but she always said that the captain gave the order and she couldn’t do anything. At 8:30 pm the plane left without us. We learned that this happens often with easyjet and that once even 30 people didn’t get on the plane. We were so angry and disappointed. We wanted to complain but we only got a flyer where we could complain online. We didn’t know what to do. The only option was to buy a new ticket as there was no refund but it was too expensive. We really wanted to go to Paris, so we decided to take Flixbus even though we would arrive in Paris the next day at 2pm but it was worth it.

At 2:30pm we arrived in Paris and drove to Hawa‘s home. Just arrived and promptly the founding meeting of the association Global New Generation ile de France started which was our reason for coming here. This was one of the longest meetings I ever had with Celisha May and Hawa Diaby but in the end we had founded our association Global New Generation ile de France. The board of directors is as follows: Hawa Fofana president, Hoda Abdallah treasurer, Sonja Prinz secretary. The association will take care of women and children who have fled from violence. It will help them with paperwork, sanitary things and will provide the necessary psychological treatment. The meeting went on for a long time until the evening and we were all simply tired from the long bus ride.

January 19th Sunday was our last and first full day in Paris. At 12 noon we went to Gabriel and Gabi where we had an appointment with them for dinner. Gabriel is an old journalist friend. After an eternity of travelling due to the Metro strikes, we finally arrived. It was important to connect Gabriel and Hawa. We barely started to eat when we had to go to the airport again , even though the meeting was really interesting with them. We took an Uber and made the flight back home this time.

here are the Photos